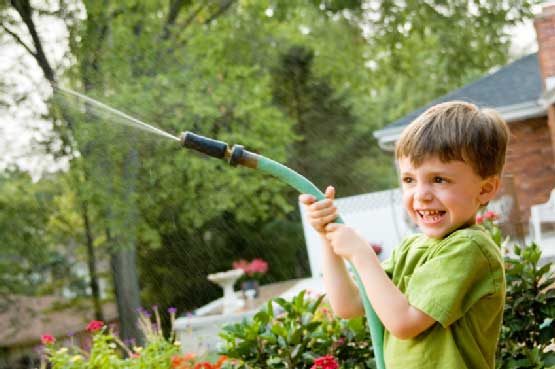 With the drought of the last few years and the resulting watering restrictions, the chances are high that a homeowner will have foundation problems sooner rather than later. So, what can a homeowner do to reduce the likelihood of having foundation problems? The only thing homeowners can do, besides crossing their fingers, is to try and maintain the moisture content of the soil around their foundation as consistently as possible year-round… and that is no small feat!

The soil in North Texas is primarily clay, which is an expansive soil. That means the volume of soil varies with the moisture content. As the soil dries out it shrinks, sometimes creating large cracks in the ground. Obviously, when the soil is dry and cracked it is less dense and cannot support the weight of your home. When that happens, the foundation moves downward or settles. Once the downward movement reaches a certain point, the foundation is deemed to have “failed” and requires repairs.

The foundation is designed to “flex” up and down with the varying moisture content. As long as the range of movement is within the design parameters of the foundation, there should be no problems. The problems usually occur when the amount of movement is beyond the design parameters. Visualize a pencil. You can bend a pencil back and forth within a certain range and the pencil is fine. If you get too aggressive and bend the pencil too much, it breaks. That is essentially what happens when the foundation is flexing beyond its design parameters. Keeping the moisture content within a reasonable range will help to prevent these types of problems.

The range of moisture in the soil can vary from totally saturated after a week-long rain to bone dry after a North Texas summer without any rain or watering. It is simply impossible to water enough to simulate totally saturated conditions. The goal is to raise the bottom end of the moisture spectrum via watering. With so many municipalities imposing watering restrictions, it is almost impossible to water enough to achieve that goal. However, a homeowner does have some things they can control. First, it is important to water thoroughly when it is allowed. That doesn’t necessarily mean water for hours and hours. If one has the sprinklers on too long, the clay soil just swells up and most of the water simply runs off to the street. There is a limit to how much moisture can be absorbed when watering. A better approach is to water for a shorter duration but do it twice on the days watering is allowed. As an example, have your sprinklers set to turn on at 12:01 a.m. on your watering day(s). Run each zone for approximately 15 to 20 minutes. Then rerun the sprinklers either when you get up in the morning or after 6:00 p.m. that evening. You’ll end up with more water penetrating the soil than you would with one long watering schedule.

It is also important to utilize a soaker hose system to augment the main watering. Soaker hoses can be used for an unlimited amount of time and can be effective if used properly. The proper use of a soaker hose system starts with the placement. Place the soaker hose roughly 12 inches away from the foundation, do not cram the hose in the gap between the soil and the foundation. If you have a gap between the soil and the foundation it means the soil is already too dry. Turn the water pressure on until the water just bubbles out of the holes. Do not turn the pressure so high that there are streams of water jetting out the holes. Then monitor each hose to determine how long to run it. The amount of time needed for each soaker hose to be on can vary around a home. This is a result of the varying amounts of direct sunlight each area receives. Remember, the goal is maintain the moisture content within a reasonable range. Walk the perimeter of your home daily during the summer months to monitor your moisture content. This will help you to decide when and how long you need to run the soaker hoses. Good luck and happy watering!

Soil
The entire DFW area has expansive clay soils. The poor soils are the biggest factor in causing foundation problems. Some areas are worse than…

OUR MOTTO IS “DO THE RIGHT THING”

Call Now
Back to the top